It was a pretty cloudy day, but we wanted to make the most out of our week-end. After looking up the Tourism Fernie website, we decided to hike/snowshoe up to Island Lake Lodge. We were hoping that we could drive up the road with the Jeep as much as possible, but turned out the gate was closed at the lower parking lot. So we parked and had to hike the entire 7km up to the lake. Because we hiked in the valley, we were able to have some nice views of the surrounding peaks despite the snow falling! The trail is pretty straight forward and large and goes through the valley and beautiful old forest. 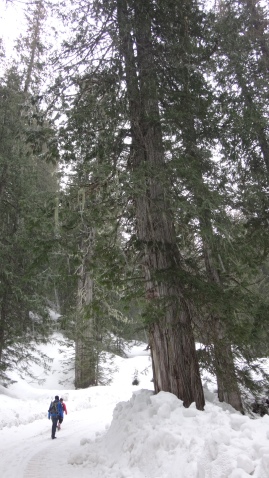 The first portion of the trail is called the Rail trail. It goes along the main road for vehicles, and because the road was actually tapped more than the trail, we ended up hiking up the road for a while. We put our snowshoes a bit later, when we got to the second portion of the trail – the Old Growth Trail. That portion is pretty steep and is a straight short cut to the lake (versus the road that does many switch backs). 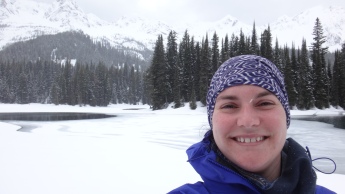 The view up at the lake was amazing. We didn’t go to the lodge because it was closed anyway – but I suspect this is an amazing area to come hiking during the summer. From the Old Growth Trail, there is also a trail that heads to the Thunder Meadows Cabin (winter and summer). Because the avalanche conditions were still a bit unsure, we decided not to venture up there at this time of the year… but I shall be back!