Just because we really enjoy early morning pick-ups (not), Guillaume, 2 other French travelers and I booked for the morning tour of the Geiser del Tatio. Pick-up is between 4-430AM to start the 1h45 drive up to 4500m where you will arrive at the park. Again – all the tours go about the same time, which means I had to wait in line for 25 minutes to go to the bathroom (would have rather just go in the bushes at that point… but wait – there are no bushes there!). 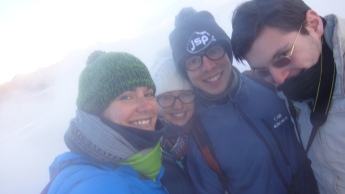 The park is the 3rd largest Geyser park in the world, and at this time of the year the geysers can go up to 5m high depending on the temperature and the time of the day. I was told early morning is better as the difference of temperature from the outside air and the geyser is higher, thus creating larger and higher jets. That’s the reason why the tours start so early too.

We had breakfast near some of the continuous geysers in the park, and had about 20-30minutes to go bathe in the hot springs. Just one thing to mention – these hot springs are really not that hot. At that time of the day the outside temperature can go down to minus 15 degrees, and the water temperature was not warm enough to make us stay more than 2-3 minutes. Getting out and dressed again was about like torture, as there is no inside heated facilities for you to change. Needless to say I finished the day with a nice cold and cough! But hey – you do this only once in your life, so we courageously went for it! 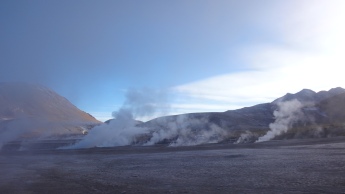 We then drove a bit further in the park to go walk around the biggest geysers. We could only see them go for 2m or lower at that point, but the fumes where huge and going up very high. I am not too sure if the geysers would have been higher if we went earlier – most of the groups went directly to the geysers when they entered the park, and then had breakfast and went to the hot springs. It would have made a lot more sense to me to do this too, but maybe because of the large number of groups, they decided to split the times when people arrive. We also actually arrived later than planned, because some of the people in our groups were late and we had to wait for them up to 15-20minutes with the mini-bus in the morning (if it was for me, I’d give a 5min waiting time and too bad… but alas). It was still nice to be almost the only group walking around the geysers. Some of the others in the group who visited other geyser parks said they were not that impressed by it, but as it was my first time, I still thought it was pretty interesting and impressive too.

On the way back to down we stopped in a little town in the mountains, where you can again visit the church (seems to be a thing here) and buy some llama meet or goat cheese empenadas. You can also pay to have your picture taken with a really cute llama… on leash. I skipped the llama photo although my friends had a point when they said the llama was actually lucky to be there, instead of being served a few meters away on the grill. It just feels to strange now to see animals on leash being used to take photo with tourists, after seeing all the animals living freely in the wild all around Argentina! 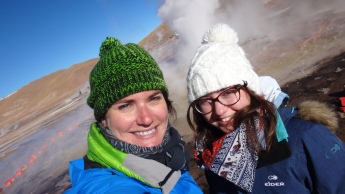 We made it back in town around mid-day and enjoyed a quiet afternoon. We decided to head up to a mirador to watch the sunset that night. Four of us left the hostel around 430PM and we walked in the direction of the Pucara de Quitor. The Pucara are ruins that are located on the top of a mountain just outside of the town. It costs 3000 pesos to get in, so we decided to change our itinerary and go up an adjacent mountain – for free. We still had a 360 view of the area and could perfectly see the town and the Cordillera, which we wanted to admire for sunset anyway. It took us under an hour to get to our view point from the hostel. We had brought some water, coca leaves and a small stove, so we enjoyed a warm tea watching sunset. 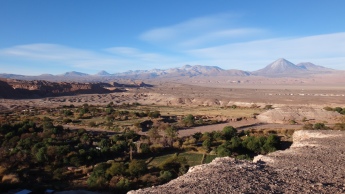 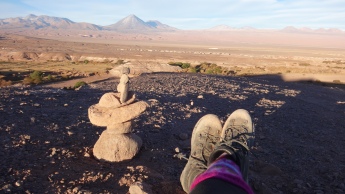 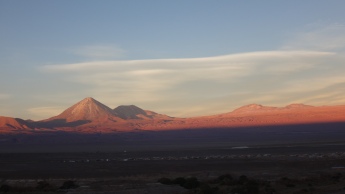 We stayed long enough to be able to look at the stars, and we decided to try going back down another way through a dirt road that came up all the way to the mirador. It was an easy way back but took us much longer to get back to town in the dark (and walking beside the main road for a while too). It was my last evening in San Pedro before heading to Bolivia for a 4 days excursion of the Salar de Uyuni.