I spent a quiet last night in Argentina at the Don Tomas Hospedaje in Purmamarca. Accommodation in this town isn’t cheap and it was the first nice place I could find after walking around for a while. To be honest it was one of the worst kitchen I have seen, but I still managed to cook something. I chatted most of the evening with a group of Argentine guys on a tour to follow their favorite Brazilian band around Argentina. In the morning I had to catch my bus at 10AM in front of one of the hotels… the bus actually doesn’t stop in the town and you need to wait by the main road so the bus sees you and stops to pick you up. I waited with 2 German guys and used our new South Americanized patience skills as we waited for our bus that was 1h late.

The road to go up to the border is quite something: there are a lot of zig-zags to go up the mountain with some pretty steep cliffs on the side. We actually saw a large truck that felt on its side in one of the turns… everything to make you feel safe. The road goes up over 4000m before going back down towards the Salinas Grande, a large salt flat in the North of Argentina. A lot of people take day tours from Purmamarca or drive the round-trip during a day. We kept going all the way to cross the Cordillera de los Andes and stopped at the Paso de Jama, the border with Argentina and Chile located at 4400m. Although they have hundreds of people crossing every day, the system at the border is absolutely hectic. Long story short, we had to line-up in 3 different queues to get our passport stamped out of Chile, then go outside again wait in another queue to pass immigration and then go out again to get our bags and pass through customs and agriculture to enter Chile. I forgot how much time we were there, but at this altitude everything feels like an effort, and I was glad when we finally got back in the bus and started to drive again. 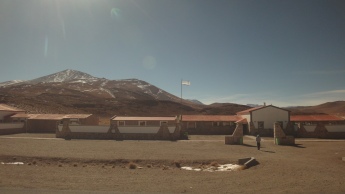 Although – that was just a tease, as we soon got held back again at higher altitude where a smaller bus was stuck in the snow, completely sideways on the road. Our driver went to help out a bit, and after probably a good half hour we started again (but only after 5 minutes of sliding and trying to drive away without success due to the slippery road…). The road passes through the Andes and there is an infinite amount of landscape to look at. Once you start going down in the valley, you will pass on the left side of the Licancabur Volcano near San Pedro de Atacama in Chile. For some reason, we also got stuck for about one hour in front of a gate about 2km away from the town. Guards lock the gate after a certain time I suppose, but the guy at the gate does not have the key… So we waited. Basically we arrived to San Pedro almost 2h30 later than it was planned. I was happy to reach my hostel at the end of the day. I also met a French guy who was staying at the same hostel in the bus (actually we ended up in the exact same dorm!) and we planned a few excursions together for the following days. 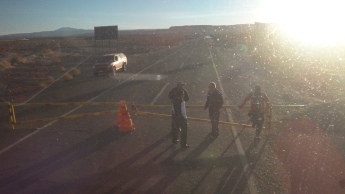 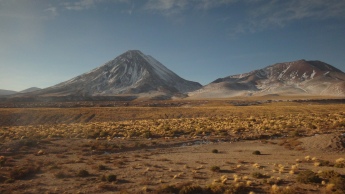 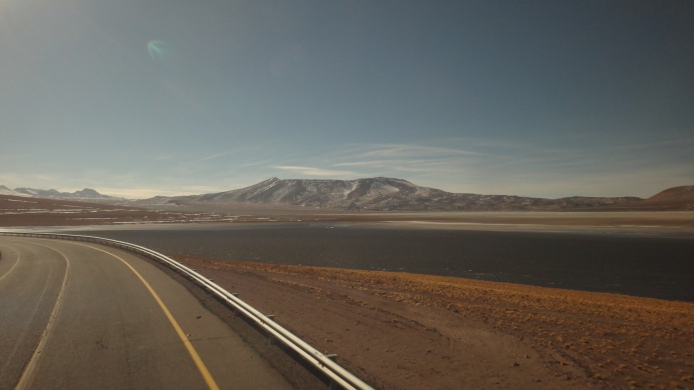 In San Pedro de Atacama I stayed at the Hostal Sonchek. It isn’t the cheapest in town for sure but it is very clean and there is a nice patio area to enjoy the sun during the day. It is a Eco-friendly hostel so they have specific times for electricity and solar panels to heat the water. San Pedro is a desert, so it is strongly recommended to save as much water as you can. The town of San Pedro itself is lovely, but way too touristy for me. Basically there are more tour agencies and gift shops than restaurants, which kills it a bit for me. To be fair there is LOTS to do around the area, so there are many tours available.

I actually took my first evening to walk around and shop for a good price for tours. After chatting with a bunch of agencies, I finally booked with IncaNorte (close to the main plaza in town). They allowed me to pay with a credit card (with a 5% fee, which was still almost better than going to the ATM) and I had such a good time chatting with Arthur and Sophia (2 travelers on a big tour of South and North America, check out their page at Caudalosaamerica.com! We actually planned to go out for some beers when I return from Bolivia next week) that I decided to book with them. I will detail the tours I have taken in my next post, as there is a lot to say and many many photos to share!