After my trek yesterday, I was looking for another outdoor activity to do around Mendoza (as I am leaving only during the week-end for La Rioja). The guides from Roca Madre suggested to give a call to their friend Marcos, owner of Milkayak. So off I went, after spending – I don’t know how long – trying to figure out how to add just another Argentine phone number on my Whatsapp (go figure, you would think after 4 months here I would have it easy but… no. +54 9 and regional codes always a struggle to me). Once more – low season, availabilities not a problem, and Marcos arranged an excursion for me the following morning.

We left town around 9am for what was supposed to be a 3hrs kayak excursion. First we had to drive all the way to Potrerillos, which is accessible through Road 7 (international road leading to the Mendoza-Chile border), until the main base of Milkayak. It is a small, locally owned company, which has about 8 kayaks (singles and doubles) at the moment. They organize tours and excursions for all levels year-round. They also organize educational activities for schools and try to make kayaking accessible for everybody. They are situated on the Potrerillos Reservoir, which is an articial lake created from the Potrerillos dam over the Mendoza river. The lake itself is located at 1300m, which makes it officially the highest lake I’ve ever paddled on (so far…). 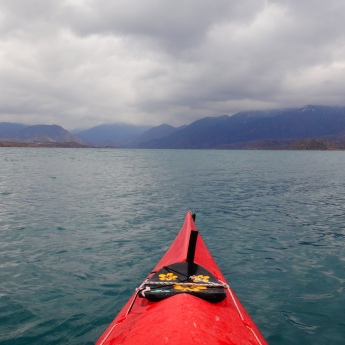 To be honest I totally lost track of time and forgot to look at my watch – but I think we must have paddle for about 2hrs (I might be wrong here) before we arrived to a small area with a nice “beach” to stop. Marcos told me usually most of the excursions of 3hrs don’t make it that far – depending on the level and experience of the person going for the tour. As I already have my sea kayak level 1 course, we skipped lots of explanations and headed straight out on the water. 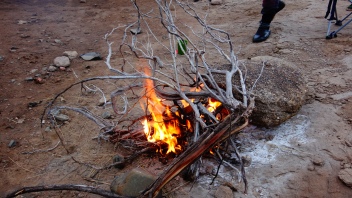 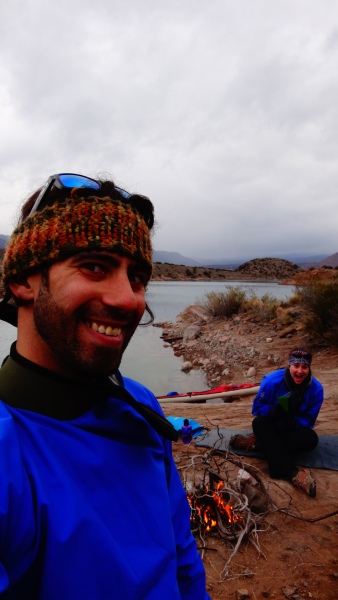 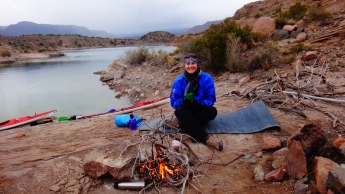 It was a bit cold and rainy for a while, but with a nice fire and warm tea, we just kept going and headed back to the base. I had a really good time and it was great to chat all day with Marcos who knows a lot about the area (thank God I speak Spanish moment #2…). It felt like I was heading out there with a good friend as I would do back home… plus now I have a place to work if I ever want to come back! If you are in the area and looking for a water sport/kayaking excursion, feel free to ask Milkayak and they will be able to arrange something nice for you!