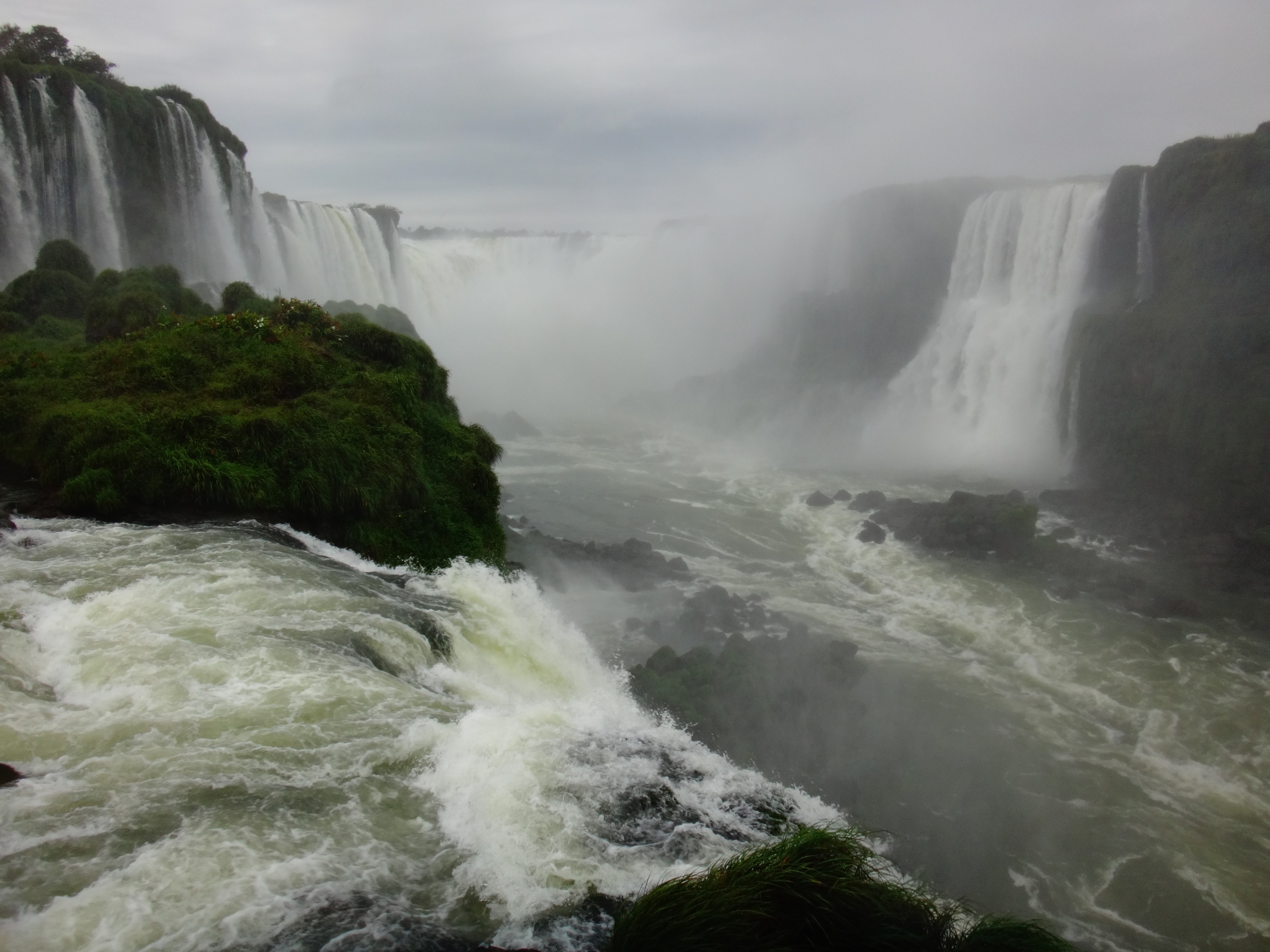 As a Canadian, I am allowed to stay in Argentina on a tourist Visa for a maximum of 90 days in a row. Period after which, if all goes well, we are allowed to renew our stay for another 90 days, either by going out and back in the country, or by visiting a consulate and paying 600 ARS. As part of CII Teach Argentina, we have a built in VISA week in our work schedule to renew our stay in the country. I then had about a week from May 7th to 15th to take vacations and go somewhere to get new stamps on my passport. My first idea was of course to go South to the majestic Patagonian Andes, and visit El Chalten (capital of trekking), El Calafate and cross to Chile in Torres del Paine. Unfortunately, flights from Viedma turned out to be very expensive and due to the season (going straight into winter), most of the multi-day treks I wanted to do were closed for the season. After weeks of brainstorming, I decided to skip South Patagonia (until next time, I will for sure be back to do the W or the full circuit and Fitz Roy one day…) and change my itinerary.

After spending a few  days in Buenos Aires earlier this month, I decided to spend most of my Visa week in the big city, and do a quick escapade to the amazing Iguazu falls (cataratas) and cross to Brazil (considering I already have my Brazil Visa in my passport for quick entry!) for a day. I was able to get a good price on round-trip flights from Bs As, which means I bus from Viedma to Bs As overnight (12hrs) and then took the ArBus shuttle (45 pesos) straight to AEP Airport for a mid-day flight (2hrs). Arriving in Puerto Iguazu, there are no public transit options to get in town – you will either have to take a cab or the Four Tourist bus, which is 90 pesos one-way and drops you down straight at your hotel or hostel. I stayed at the Nomads Hostels in the center of Puerto Iguazu and it was very lovely. The hostel was calm and clean, with a very nice vibe. We would usually meet around dinner time (well… gringos dinner time, i.e 6pm) to chat and drink some wine with other travellers. The hostel is about 5min walk (not even) to the bus terminal AND an amazing 24hrs bakery. At night we went to have a few drinks to the Mango Chill hostel, which is much bigger and more of a party vibe, although some people staying there told us that the larger dorms where not very comfortable.

It was the fall during my stay, which means low season and rain, so I had a lovely 3 days of rain when I visited. My first afternoon I had just enough time to walk to the Hito de las 3 fronteras, which is a viewpoint where the 2 rivers come to an intersection and form the border between Argentina, Brazil and Paraguay. It is less than 30min walk from the center of town.

On my second day I decided to tackle the BIG day for Visa renewal. My schedule was a bit off from most people in the hostel, so I was mainly alone to go to Brazil that day and visit the Brazilian side of the waterfalls. Luckily, I met two French guys who were also heading for the day and we hanged out during the bus ride. For some reason, I was a bit nervous about the idea of going over the border to Brazil alone for the day but… I am slowly getting use to this now!

So here we went: from Puerto Iguazu, you need to take the bus directly to the Brazil Cataratas (80 pesos round-trip) from the bus terminal. Buses come every hour or so. I took the first one in the morning just in case the border crossing would be complicated. Luckily enough, the driver rassured me that it was very easy and they would stop with us and help us through Argentine and Brazilian customs. Which they did! In less than 15 minutes we were in and out of both customs offices, my passport stamped in Brazil and off to the falls! Just before arriving to the Brazil side of Iguazu Falls, there is a nice park with hundreds of birds and animals to go and visit. Our bus driver took us to the ticket office for those who were interested. The entry was about 125 pesos from what I can remember. The Parque de Aves is an area of conservation and research where most animals were either rescued or born directly in the park. At first I was feeling a bit weird to see all these beautiful birds and animals in large caged areas, but knowing that it is not only a zoo but a research facility made me feel better about the visit. I saw some animals I didn’t even know existed and got as close as it gets to a pink flamengo! 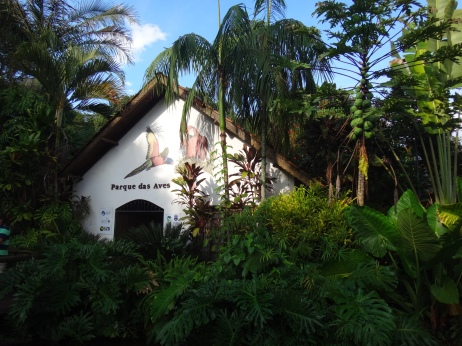 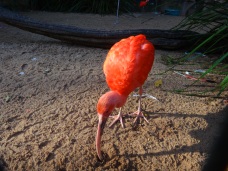 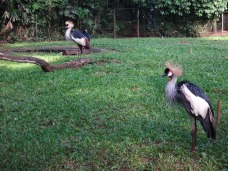 Now the falls. The entrance of Iguazu park is located 2 minutes away from the Parque de Aves. They do accept credit cards at the entrance, which was pretty convinient for me. It was about 260 pesos, but I have become a bit confused with the prices as I saw some contradictory information. Anyways, my Visa was charged about 25$CAD. The Braziling side is really organized and you have to take a bus at a specific time to get into the park. It is a 10 minutes bus drive through the forest with stops at different zones (for example you can go down for additional excursions like the boat tour). I met a lovely lady from New York and spent the say with her at the falls. She came to Brazil to give a conference about human trade (uh!) and decided to take her last few days to visit Iguazu. In order to keep the conversations on a joyful level I avoided telling her what I used to do for a living (wink).

The Brazilan side consist mainly of a major side walk or pathway where you have an amazing panoramic view of the falls. Be patient for photos as the best spots will be crowded with tourists patiently waiting their turn for their selfies. At the end you can also walk on a platform that goes right over the edge of the falls (rain jacket recommended!) and where you can see the gigantic falls surrounding you. Some people say the Brazilian side is not worth seeing if you have to chose only one day, but I think you get a better general views of the falls from the Brazilian side and it offers a complete different experience. So if you have the time and the money, just do both! 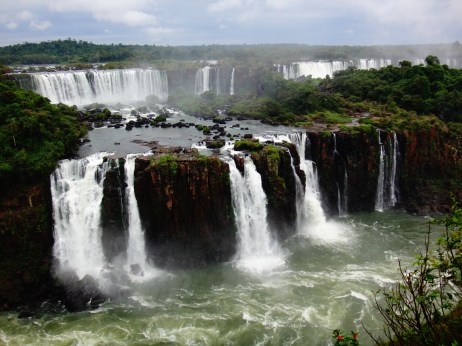 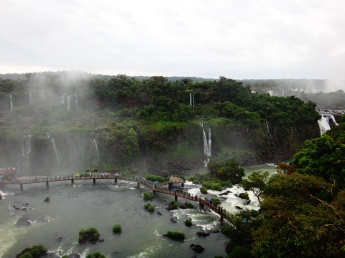 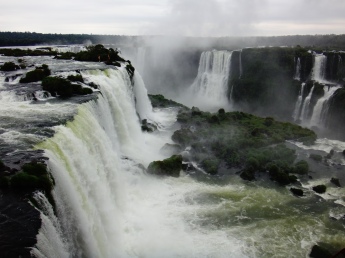 There is also an elevator going up to the last viewpoint before heading out towards the exit and cafeteria area. It is worth going there, where you can also see the platform on the Argentine side on top of the Garganta Del Diablo (Throat of the Devil). One thing though: watch for the coatis. These animals seem cute at first but are absolutely restless and they will hunt you for food and attack you for it. I am not kidding – I had to get up more than 6 times from my table while I was attempting to eat a sandwich. They will come and take it from your hands! So watch out – some of them are known to carry rabbies as well. This poor lady made the mistake of carrying food in a bag that was an easy target for them… for the record this happened 30seconds after getting out of the buses.

I took the bus back to my hostel that day and met up with 2 other girls from CII Argentina who just arrived in Puerto Iguazu. The day after, I was ready to head to the Argentine side. You’ll need to get a bus from Puerto Iguazu terminal to the Argentine falls (130 pesos round-trip). The park on this side only takes cash (but there is an ATM) and cost 330 pesos. If you go 2 days in a row you can validate your ticket before you exit and get a discount for your second day entrance fee (this is valid ONLY for the Argentine side of the park). A friend from the hostel gave me her ticket so I could use it, and it turned out in the biggest lamest series of lies I have ever tried to perform (she didn’t validate it at the exit, so the cashier asked me to show her a photo of me at the falls the previous day, and when I said I didn’t have any, she asked where I bought the ticket and if it was a girl or a boy cashier, etc… all in the hope of giving me my discount… which I obviously did not get). So anyways. Remember to validate your ticket, folks. 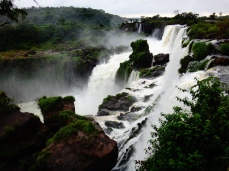 The Argentine side is a series of trails and train paths that you can take during the day. You can do as much or as little as you would like. I visited on a Monday during low season, and it was unbelievable how quiet it was (which also resulted on less crazy coatis, which was nice!). Some people told me to finish with the visit to the Garganta Del Diablo, as it is the highlight of the day, but I decided to start with that to beat the crowd with the train wait. The Garganta Del Diablo is absolutely amazing and it is breathtaking to see the power of the water at this part of the falls. I spent a good 30minutes fixing the fall and feeling its power taking me away and almost could feel myself being carried away with it at some point. If you are afraid of height, it might actually make you noxious.

Most of the paths are made of wood or metal, which I found to be quite slippery at times. I would strongly recommend wearing good walking shoes with a grip and avoid any flat slippery shoes (like flip-flops). Each path is given a difficulty level on the official map, so you can decide where you want to go or not. I did them all of course, you must be starting to know me a bit by now, and ended with the must-do boat excursions (12 minutes, 350 pesos) that takes you straight IN the falls. I recommend bringing a small towel and a change of clothes. You’ll need it. 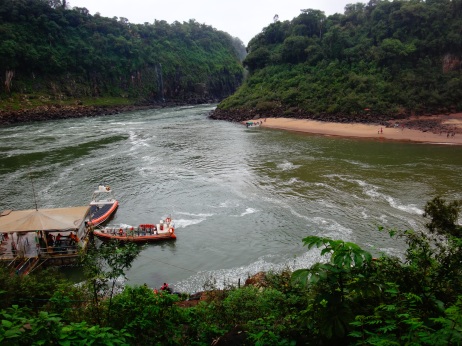 After 3 relaxing but surprisingly tiring days in Iguazu (lots of walking involved), I went back to Buenos Aires to end my Visa week. By now I have decided not to go back to Bs As later during my stay in South America, so Iguazu and Bs As were my last stops in the East of the country for a while. I will cover my week in Bs As in the next post!
Enjoy!