Almost a month has passed since I arrived in Viedma for a 3 months teaching contract. The town of Viedma is built along the Rio Negro river, which also separates the provices of Buenos Aires and of Rio Negro. The river joins the Atlantic Ocean 30km East of town, in an area called by the locals “La Boca”.

Accross the river, right in front of Viedma, is another small town called Carmen de Patagones. It is a small, pittoresque town that offers many great views of the area. There are only 2 bridges crossing the river to go from Viedma to Patagones – the other option is to cross the river by boat. There is a small bus service for 7 pesos that takes you from the center of Viedma to Patagones. We took the boat shuttle the other night to meet up with our English teachers colleagues from school and go out for dinner. There is a long boardwalk along the river (both in Viedma and in Patagones), which are both very nice. I do have to say that Patagones offers the best view for the sunset… Seawall feeling.

We had dinner in a new restaurant called Verona. The prices were quite high but the quality (and quantity) of the food was amazing (and the wine, too! ha!). We left the restaurant past midnight, as dinner here is served quite late (booking the table for 9pm means people show up at 930pm, means food on the table by 1030pm!).

Last week-end we went on a little roadtrip and visited La Loberia, which is a small village/beach/area about 60-70km away from Viedma, just South of Playa El Espigon (surf spot). There is a very nice beach at La Loberia, where the rocks create water pools at low tides to relax in. Make sure you watch the tides though, because the water comes up quite fast and you’ll end up stuck in (you can always swim over the rocks but that can be a bit tricky!). If you go at high tide, watch your feet in the water (as you won’t be able to see the rocks!).

Another 5-10minutes away South is Punta Bermeja, where you can observe an absolutely smelling and noisy massive colony of sea lion. It costs only 30 pesos to enter and it includes a pair of binoculars.  It is a protected area for marine mammals. At the visitor center of Punta Bermeja, there are some specimens of the different animals found in the region. But the best part at this time of the year was to observe the 4000 lazy sea lions tanning in the sun on the beach and down from the viewpoint on the cliff. Be ready for the smell though – the wind will definitely blow strongly all the way up to the viewpoint! There used to be 6 view points, but they were much closer to the cliff and with time they fell or where closed for safety reason. 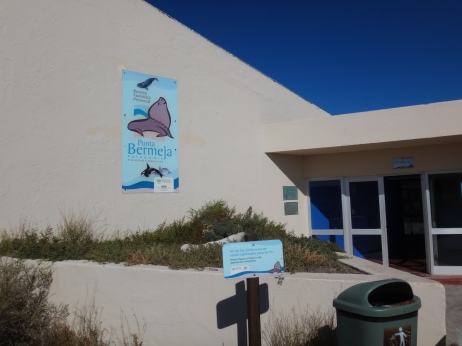 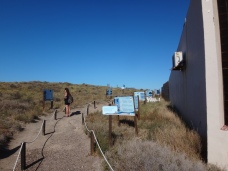 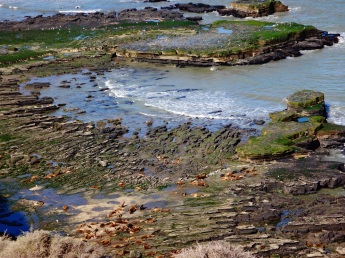 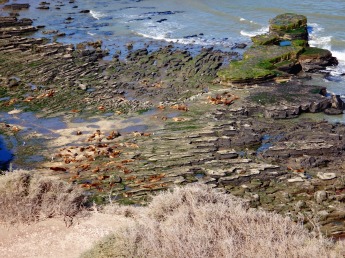 I’m slowly getting use to my new routine here, taking 4 dance classes a week, journaling, updating my blog when I can get my hands on a great wifi access, and looking for plays or shows we could go to to practice our Spanish and discover the culture.

Friday I’m heading to Puerto Madryn for 3 days, to observe some large marine mammals (yeap!) and just hang out! Come back next week for the new updates!

One Comment on “Carmen de Patagones and La Loberia”